I entered the Virginia Tech Corps of Cadets in the fall of 1986, somewhat by accident.

I applied to all the military academies but did not receive an appointment. I was, however, accepted to Virginia Tech and decided to follow my older brother, who was a junior there.

After my acceptance, I received an Air Force ROTC scholarship, which I honestly considered turning down. After a lengthy discussion with my father about tuition benefits and career opportunities, I decided to take advantage of at least one year of the scholarship and consider my options at that point. Accepting the scholarship and attending Virginia Tech meant that I had to be in the Corps. It turned out to be a pivotal decision from which I derived multiple life lessons and benefits that I enjoy to this day.

While not too excited about the prospect of being in the Corps, I decided to visit. When I did, Cadet Karl Schuetze ’87, a good friend of my brother’s, showed me around. I don’t remember too much of the visit except for Karl telling me that I should request his company, F-Troop, which I did.

I was assigned the room right across the hall from Karl, now a senior. Any time my door opened, Karl or his roommate was on me. This arrangement led to significant lessons for me.

Unbeknownst to me, Karl would periodically tell my brother how I was doing. In turn, my brother would relay my status to my folks, which led to encouragement when I’d call home to complain. This is where I learned an important lesson about taking care of each other. It isn’t simply making it easier, sometimes it’s about demanding more while being an unseen safety net.

The most significant lesson I learned is that there are worse things than failure; among them is quitting. The Corps instilled in me mental toughness to never quit. The upperclassmen certainly made it hard, but nothing could compare to the challenge my civilian classmates put on me.

I remember distinctly sitting in my 8 a.m. freshman English class on a particular Monday morning in the fall. A couple of civilians were talking about the party they went to on the previous Friday night. As I heard them discuss it, I reflected on my Friday evening of polishing brass, shining shoes, and getting braced up. Yep, I was having almost as much fun as they were! It forced me to commit to my goal and toughen up.

After graduation, I was commissioned into the Air Force with a pilot slot. Attending flight school didn’t work out, and I faced my first big career decision. The Air Force offered me an opportunity to walk away owing nothing on the scholarship or cross-train into another career field. It took much soul searching, but I decided to stick it out. I cross-trained into space operations, and the Air Force gave me a choice of two assignments: Falcon Air Force Base, Colorado, to fly satellites or Holloman Air Force Base, New Mexico, and they couldn’t tell me what I’d be doing.

Life’s an adventure, so I took the latter. 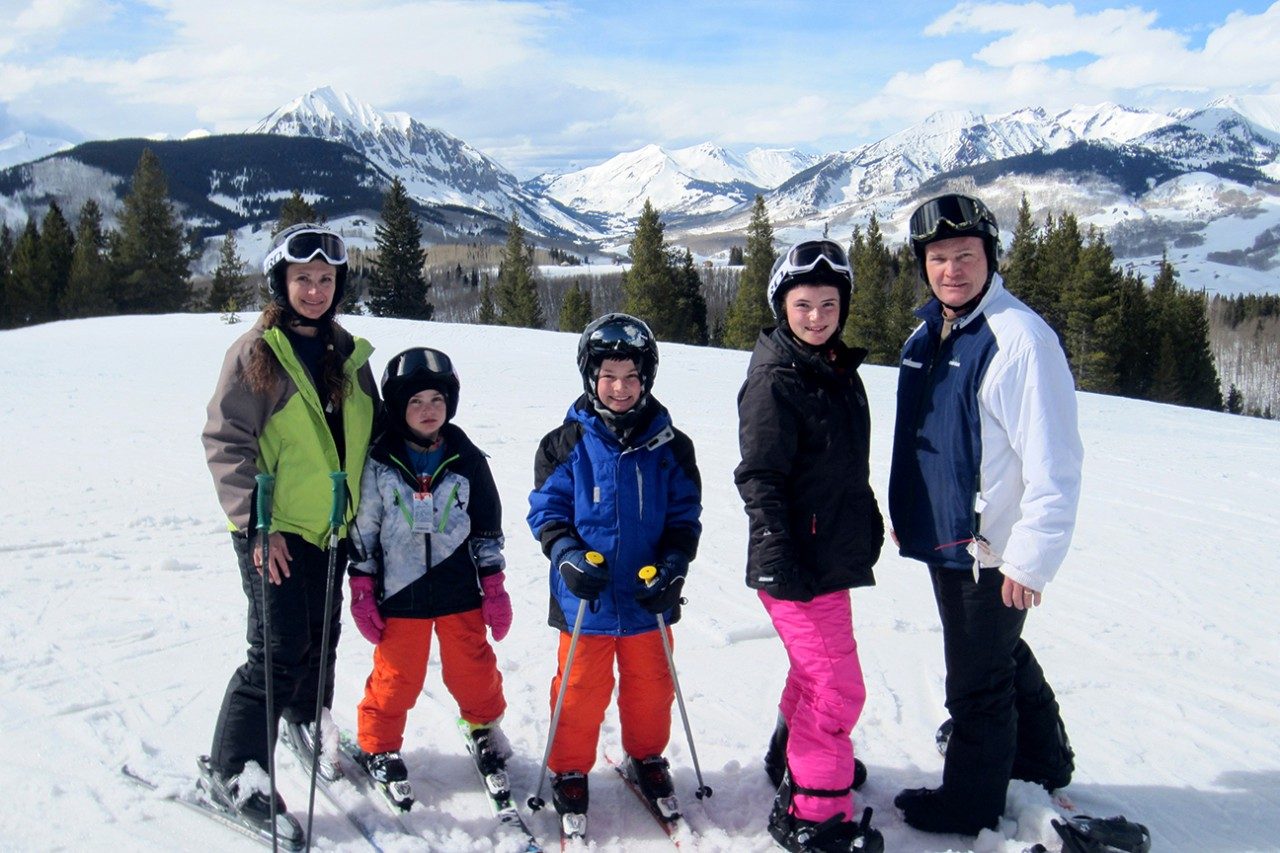 The Dorminey clan enjoys one of the many outdoor activities Colorado has to offer. 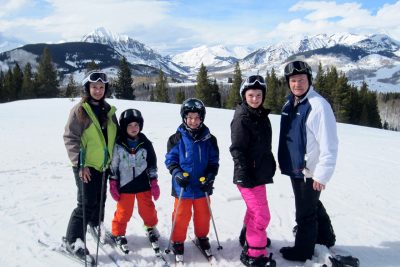 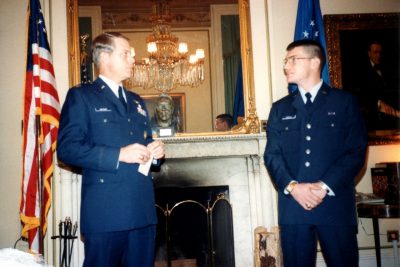 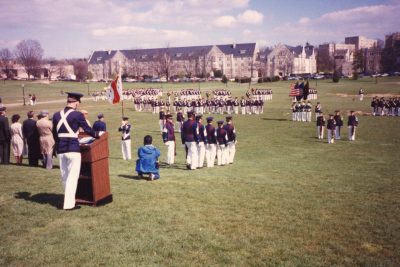 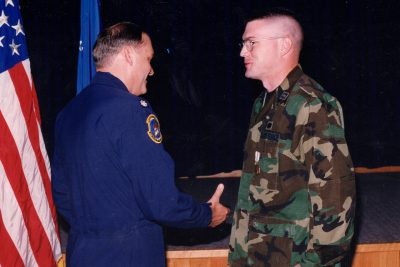 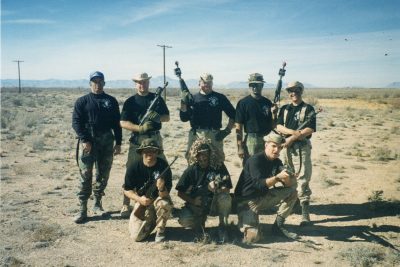 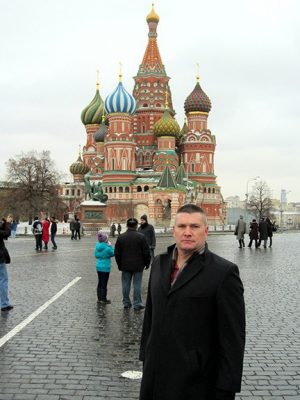 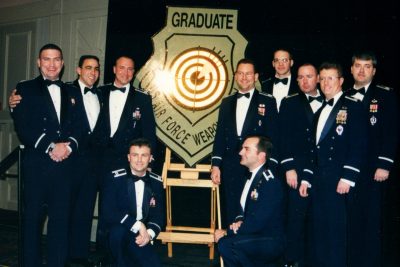 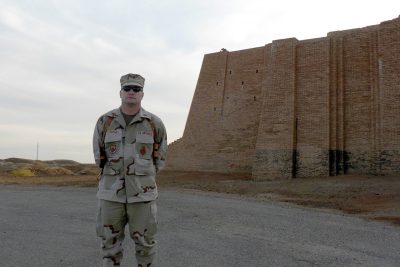 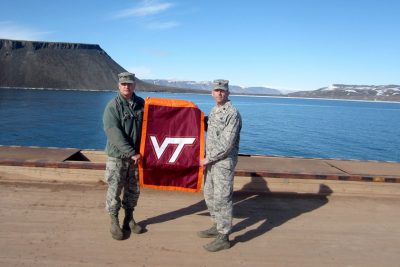 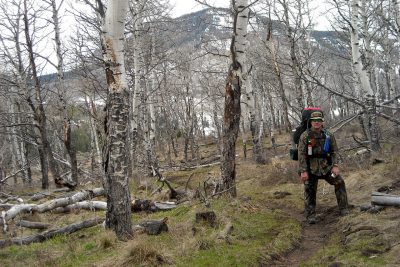 After initial space training at Lowry Air Force Base in Denver, I made the trek to Holloman and the 4th Space Warning Squadron to execute mobile space-based missile warning. As it turned out, the 4th was a great finishing school for a young lieutenant.

As a space operator, I was trained to process strategic missile launches, but I spent a majority of time as a deployment commander, leading a convoy of vehicles with 23 armed personnel into austere locations around the globe. The leadership lessons I learned in the Corps helped me advance into leadership roles as an instructor and evaluator in both missile warning and field commander duties. I was thrilled to lead airmen in multiple field exercises across the Southwest, on a deployment to the outback of Australia, and during a long-haul road trip to Georgia.

Most significant, however, I met my wife.

After three years, I was transferred to Falcon Air Force Base. Assigned to the 2nd Command and Control Squadron, I was responsible for executing a portion of the space surveillance network to track over 23,000 man-made objects in orbit. It is also where I had my first opportunity to work for a Virginia Military Institute graduate. Lt. Col. Jim Mackin took command about halfway through my tour. He, like Karl Schuetze, hassled me continuously, but it was all in good humor. We developed a tremendous mutual respect, no doubt founded on our similar cadet experiences, and in the end he made me a better officer.

Having completed my second operations tour, I transferred literally across the street to the Space Warfare Center, working space tactics and teaching the Space Theater Integration Course. The traveling course taught Air Force planners in the field how to integrate space effects into the fight.

It instilled a desire to further my involvement in space tactics development and integration into the broader fight, which led to my application to the upstart Space Division of the Air Force Weapons School at Nellis Air Force Base, Nevada. Weapons school was the hardest education and training experience I’ve ever had — Virginia Tech engineering included. Ten students are put through a six-month crucible of tactical planning, execution, and integration of all aspects of the space domain.

After graduation, I wanted to deploy to the field to employ what I’d learned. The needs of the Air Force, however, trumped my desires, and I was retained as an instructor. It turned out to be one of my most rewarding assignments. The unit was all weapon school graduates, hand-picked and highly motivated. We challenged each other every day to be better, and there was no doubt that we had an impact on the fight.

At the beginning of my second class as an instructor, 9/11 occurred. Suddenly, we weren’t training folks in case we got into a fight. We were training to go directly into the fight. I could not be more proud to have served with these officers and the contributions we made.

I had an opportunity to deploy in support of the Marines in the Pacific, but we didn’t get to launch our operations in earnest. Before we could, operations in Iraq kicked off, and our resources were repurposed. Still wanting to get close to the fight, I volunteered for an assignment with U.S. Air Forces Central Command (AFCENT).

As the chief of the Commander’s Action Group, I was responsible for all travel planning, speech writing, and special projects for the combined force air component commander. In the two years assigned at Shaw Air Force Base, South Carolina, I spent about 60 percent of my time bouncing around the Middle East. My travels exposed me to servicemen and women from all branches, and I found their dedication to be profound.

Finishing two years at AFCENT meant that I had spent over six years outside of Air Force Space Command. It was time to get back, so I accepted a job as the chief of exercises for the command at Peterson Air Force Base, Colorado. The job required me to exercise every wing within the command, which refreshed my knowledge of the vast number of weapon systems we operate. As it turned out however, the job was short-lived as I was selected as the operations officer for the 22 Space Operations Squadron (SOPS) at Schiever Air Force Base, Colorado, in 2007.

A good friend of mine was the 22 SOPS operations officer and was picked up for command earlier than expected, leaving his position vacant. He suggested I replace him. As the operations officer, I was responsible for executing a global network of ground antennas, providing command and control for all Department of Defense satellite systems, as well as a few National Reconnaissance Office systems. No two days were the same, and I enjoyed every minute. While not typically the case, two years later I was selected to fleet up and command the squadron, giving me a total of four years of involvement in every satellite program in the Defense Department.

As my command came to a close, the timing worked out for another education opportunity at Air War College at Maxwell Air Force Base, Alabama. It was a year of gentlemanly hours after command, giving me an opportunity to refresh and reconnect with the family — which turned out to be a significant blessing. My next assignment would be my most demanding.

After War College, I was sent to the Joint Space Operations Center (JSpOC) at Vandenberg Air Force Base, California, the operational-level command-and-control node for all Defense Department space. We were responsible for planning, execution, and assessment of global space operations, and I got to see it all.

In three short years, I had led four of the six divisions in the JSpOC and ended up doing some time as the deputy JSpOC director. Those were some long days, but the work was impactful and the team of space professionals was impressive.

I expected to finish a full four-year tour but was selected at the three-year point to be the 21 Space Wing vice commander, where I currently sit. This job has truly been the pinnacle of my career. We are the second-largest wing in the Air Force with over 4,000 highly motivated personnel serving in 16 locations around the globe. We execute space control, global space surveillance, and strategic missile warning and missile defense of North America. We are responsible for six Air Force installations to include Cheyenne Mountain Air Force Station; Thule Air Base, Greenland; and Peterson Air Force Base, home to NORAD, USNORTHCOM, and Air Force Space Command. The size of the wing takes the wing commander on the road a great deal, leaving me to run the ship in his absence.

I’ve got one more assignment left in my career and, as life comes full circle, I’m headed back to where it all started. I’ll be taking command of the Air Force ROTC at Virginia Tech this summer. I find it extremely poetic to end my career where it all began. I look forward to giving back to the two organizations that shaped my adult life — the Air Force and the Corps. I can’t think of a better way to wrap up a career than shaping the next generation of officers.

The time back at Tech will take me to a full 30 years on active duty and required retirement. It will certainly be tough to hang up the boots. It’s all I’ve known since graduation from high school, and it has been a great ride! The places I’ve seen, the people I’ve met and had the honor to serve with, the jobs I’ve been entrusted to do — I really can’t believe I got paid to do this!

Keep Us in the Loop

As you move or change duty stations throughout your career, make sure you continue to get the Corps Review and other updated university and Corps information.

Also, share your news and photos with us for the Corps Review's Class Notes section. Submit your items online at vtcc.vt.edu/classnotes.