High-speed cameras placed in the Pacific Ocean capture the Minuteman III test vehicle as it re-enters the atmosphere.

Entering my freshman year in 2008, I never imagined what the future might hold. I certainly had no clue that I would be operating some of the most powerful weapons ever developed.

During my senior year with the Virginia Tech Corps of Cadets, I put in my dream sheet hoping to get 13S, which at the time was known as Space and Missiles. Little did I know that by the time I was going through initial training in 2012, the career fields would split, and I would be part of a missile combat crew, or missileer, for the Minuteman III missiles.

First deployed in 1970, the Minuteman III intercontinental ballistic missiles (ICBM) have provided nonstop nuclear deterrence. Today, there are hundreds ICBMs spread out across the fields surrounding Francis E. Warren Air Force Base, Wyoming; Malmstrom Air Force Base, Montana; and Minot Air Force Base, North Dakota. On a day-to-day basis, the missiles sit in their individual silos and are connected with miles of cable to underground launch control centers (LCCs). The LCCs are manned at all times by two officers frequently known as missileers. From the LCC, the missileers monitor the status of up to 50 missiles at any given point. Contrary to popular belief, we do not sit in the silo with the missiles. 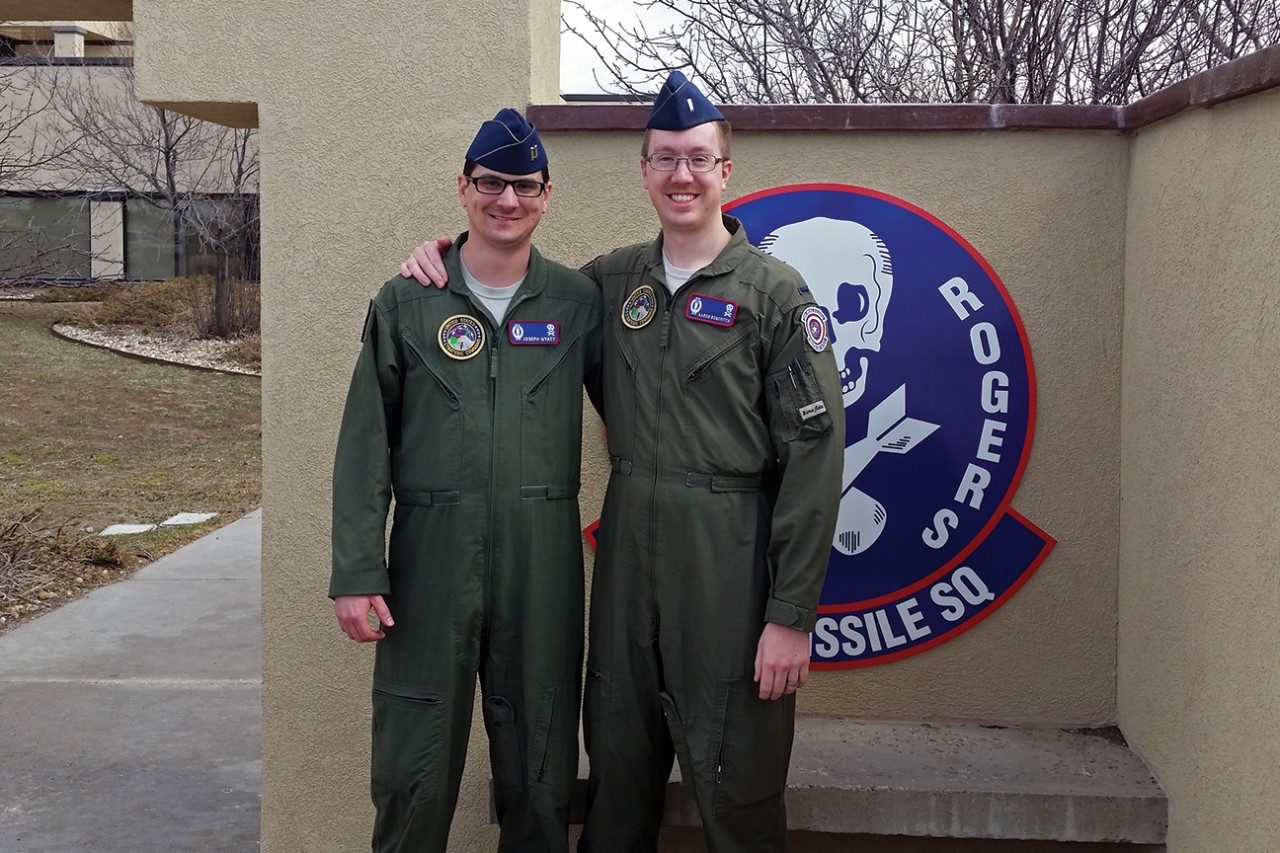 Aaron Bonovitch’s first crew commander, Joe Wyatt, at left, poses for a picture with him after his last alert at F.E. Warren Air Force Base. 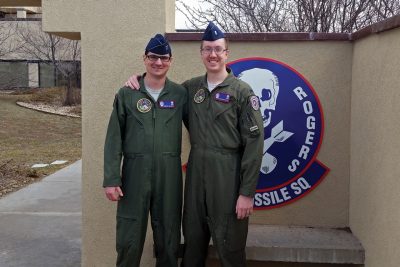 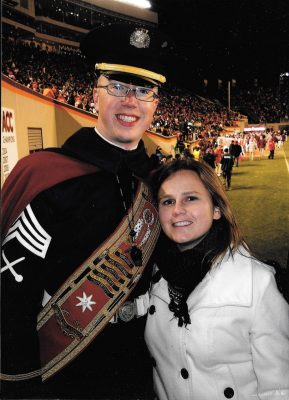 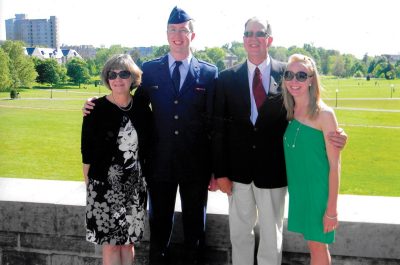 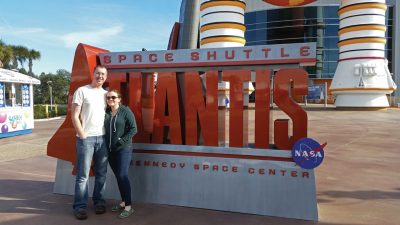 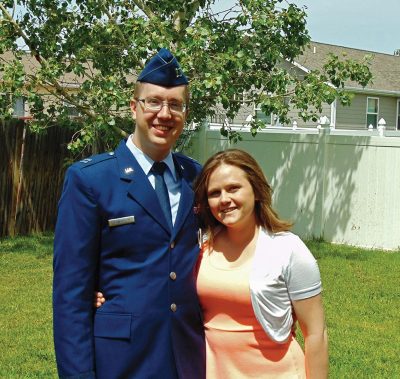 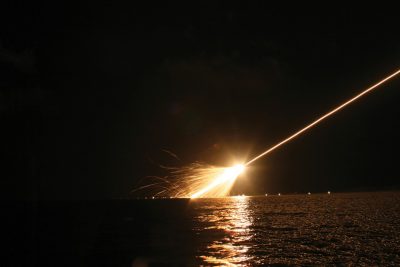 When going on alert, we start our days by attending a daily mission planning meeting. This gives crews the opportunity to plan for the day’s activities, maintenance, and weather and eliminate as much risk as possible. After the planning, crews depart for the missile field. Crews may travel as little as 45 minutes to their designated LCCs or up to three hours in some cases. Once on site, we meet with the security forces guarding the site to conduct mini mission planning and work with the facility manager to ensure the facilities are functioning properly.

Following our meetings topside, we begin our descent roughly 40 to 60 feet down a freight elevator to arrive at the LCC, or capsule, as we call it, and say goodbye to the daylight for a time. At this point, we meet the off-going team members as they eagerly await their chance to get some fresh air.

After the off-going crew leaves, the oncoming team begins the 24-hour shift. At least one crew member is awake at all times once the blast-door is closed and we are sealed inside. We do have one small bed and an airplane-style bathroom in our trailer-sized capsule. From our consoles, we monitor the status of the missiles.

Some days will be quiet, and crews may have time to watch a movie or work on furthering their education. Other days will be extremely busy as crews struggle to coordinate phone calls, commands, and status of maintenance and security in the missile field. Each day brings new surprises and challenges, though, as we work with an aging weapon system.

New missileers can expect to complete eight alerts per month, plus an average of three training days added into the mix. In the current construct of the career field, missileers can expect to complete three years of these alerts before moving to another missile base for another three years of being an instructor, evaluator, or flight commander, among numerous other roles. Following the first six-year period, the horizons broaden as jobs open up, such as working with the test squadron at Vandenberg Air Force Base, California, or even NATO forces in Europe.

Before getting to this point, all missileers complete six months of initial training at Vandenberg Air Force Base. I began my training in July 2012 and learned everything from the basics of missile flight to processing classified messages and launching missiles. Most of the training consists of classroom work, but as the training progresses, we put our skills to use in a simulator. The instructor who operates the simulator can present different statuses to the students. This includes a variety of scenarios from fires to security issues. Fortunately for Hokies, our experiences in the Corps prepared us to keep calm and think clearly during these stressful scenarios.

The ultimate role of the missileer is to launch a missile, yet it is a job we hope never comes. The caveat to that outlook is the opportunity to launch an unarmed, test ICBM out of Vandenberg Air Force Base to an isolated island chain in the Pacific Ocean. In October 2015, I had just such an opportunity.

At the time, I was a crew commander stationed at Warren Air Force Base in the 319th Missile Squadron. My flight commander notified me of this opportunity, and of course I jumped at the chance to head back to California for a five-week TDY. In addition to myself, there were five other missileers and approximately 10 maintenance team members from Warren Air Force Base assigned to the launch. For us, this was a great chance to change up our routine. For the 576th Flight Test Squadron based at Vandenberg Air Force Base, it was business as usual. This unit would handle the full-process of the scheduled test launch and give us our directives.

Upon arrival at Vandenberg Air Force Base, we all met up with the team from the 576th to get a better idea of the mission. The goal of a test launch is not just to turn the key and launch a missile; it is a chance to gather all sorts of data while the missile is in its silo and in flight.

The airmen from Warren were tasked with installing the missile in the test silo at Vandenberg and preparing it for operations. This process takes time as the teams must transport and load a 60-foot missile in a vertical silo. This provided us crew members a unique opportunity to watch the process. Missiles are installed, removed, or repaired on a regular basis at the operational wings, but crews are always underground when it happens. Without windows and miles away, we supervise these maintenance movements, but are unable to see them in action. This test launch gave us a chance to see the process for ourselves and get a better understanding of what we’re missing.

The only difference in this and an operational missile is that a team at Vandenberg installs a set of sensors for the test and a self-destruct mechanism for safety purposes. We were lucky to work with such an incredible team of maintainers. They worked patiently with us to explain each part of their process, and, when allowed, let us down into the silo with them to observe up close.

Once the missile was installed and powered, my job as a missileer began. There were six of us crew members total to “pull alerts” at the sole LCC at Vandenberg. It was a bit unusual for us as we are typically used to monitoring numerous missiles and activities, not just one. The three crews provided 24/7 coverage from the moment the missile was started up to the night of the launch. During this time, various tests were run on the missile to verify its capabilities. These tests provide valuable data to the 576th, which can analyze the data in comparison to other tests and provide reliability numbers to those who may need to know.

After several weeks of alerts and monitoring the missile, the time had come for the launch. This was the culmination of months of work from many different agencies, to include the space launch teams at Vandenberg, who provided overarching supervision and monitoring of the launch. For the actual launch, we had all crew members in the LCC to participate that night. Our window was from midnight to 6 a.m. This means we had a six-hour gap in which to launch the missile toward the Kwajalein Atoll. Although this sounds like a great deal of time, there are various instances that could delay a launch. For example, even if the weather is clear at Vandenberg, we need relatively clear weather at the missile’s destination to get the maximum amount of data from the test. In our case, the hold-up took several hours as we waited on teams to fix a piece of monitoring equipment.

Alas, the time finally came at which there was no return. Just 30 minutes before the end of our window, a countdown voice came in over the phone lines, similar to a NASA space launch. As the countdown dropped, another crew member and I anxiously put our hands on our key and switches (four total are turned by two crew members). Upon turning our switches, we heard the audible alarm and watched our screens as a launch command was sent to the missile.

Normally, a missile launch requires the command from at least two different LCCs. In this case of testing, a second crew took our place at the seats and awaited their chance to turn the switches. For the first two of us, that was our chance to hurry up the elevator and outside to wait for the launch.

Having done our part, we had a rare opportunity to both send a launch command and watch the Minuteman III launch. Not long after we had arrived upstairs, the night sky lit up brightly, and we heard the roar as almost 80,000 pounds left its silo in a hurry. Thanks to a clear night, we were able to see the missile for several minutes as all of the stages broke away and fell back into the ocean.

Our job was done. All that was left was to shut down our control center and return to the main base to debrief the mission. Well within that time, about 45 minutes, we had word that the test warhead had successfully landed in the target area roughly 4,000 miles away. It was all over in minutes, but it was a once-in-a-lifetime opportunity that I had no idea awaited me those years ago when I was just struggling to learn the names of my buds.